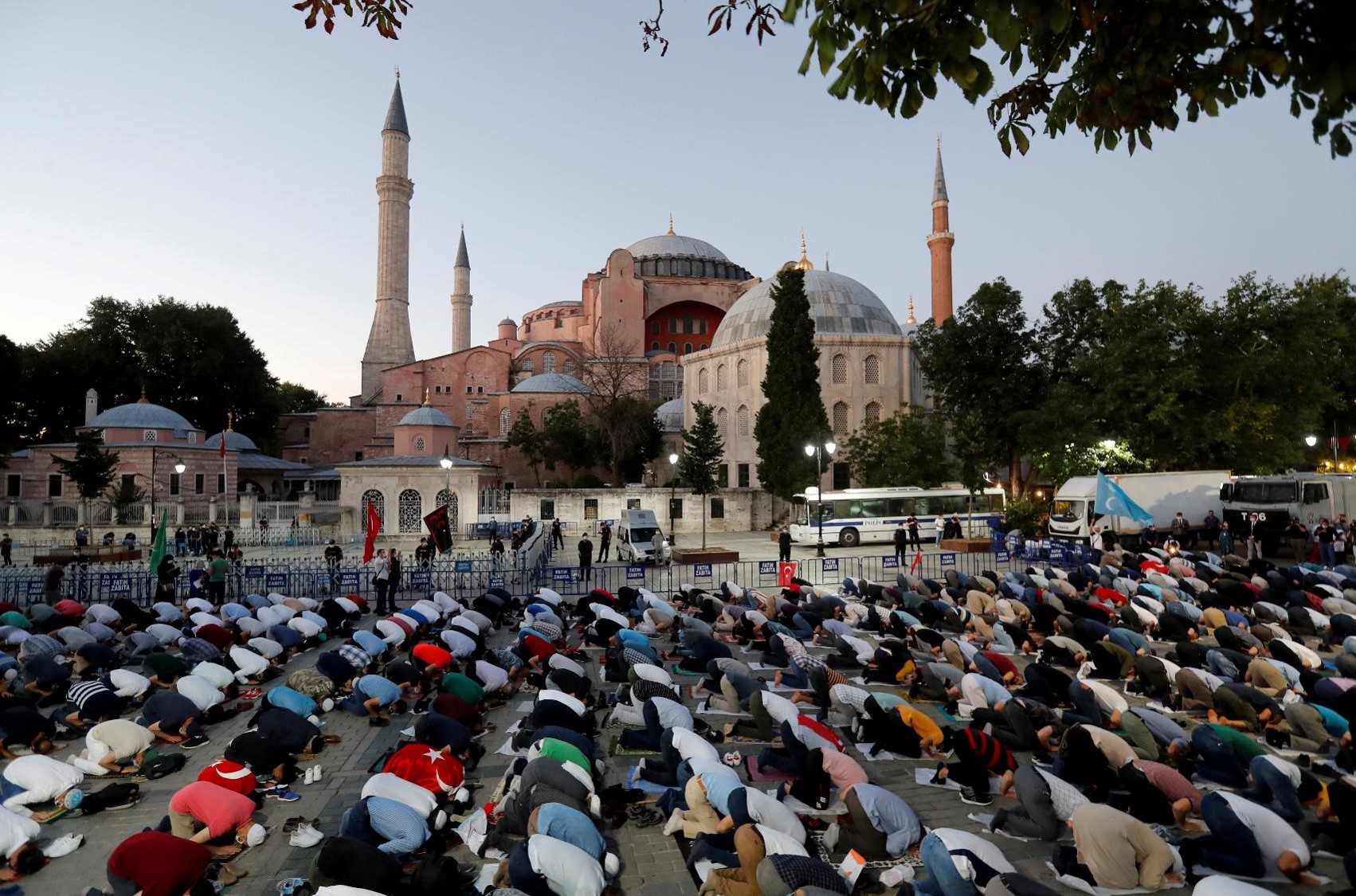 Turkey and the European Union (EU) clashed on Monday [13 July] over Ankara’s decision to change the status of Hagia Sophia from a museum to a mosque and its continued energy exploration in disputed Mediterranean waters. After their first face-to-face meeting in months, the 27 EU foreign ministers said that they “condemned the Turkish decision to convert such an emblematic monument as the Hagia Sophia.” (Ekathimerini)

On 10 July, Turkish President Recep Tayyip Erdoğan issued an unprecedented decree converting Hagia Sophia once again into a mosque. His decree came just hours after Turkey’s high administrative court threw its weight behind a petition brought by a religious group and annulled the 1934 Cabinet decision that turned the site into a museum. After the decree was issued, celebrating Islamists, shouting “Allahu Akbar” (“Allah is greater [than everything]”), converged on the former cathedral. The site is set to reopen as a mosque, for Muslim prayers, on 24 July. It is believed that during the Muslim prayers, Hagia Sophia’s world-famous Byzantine mosaics will be covered (images are forbidden under Islam). As Giulio Meotti (for the Gatestone Institute) points out: “Turkey did not, strictly speaking, need another mosque: in recent years [Mr] Erdoğan has built 17,000 mosques in the country.” He goes on to say: “By appropriating the building, the defenders of political Islam seem to be trying to ‘erase Turkey’s Christian past’.” For Mr Erdoğan and other Islamists, Hagia Sophia is the prime symbol of Christianity’s subjugation to Islam. “Hagia Sophia is the symbol of conquest”, said Yunus Genç, who heads the Istanbul branch of the Anatolian Youth Association. “It belongs to us”.

Turkey, apart from Israel, has more Biblical sites than any other country. Approximately two-thirds of the New Testament was written either to or from Asia Minor (modern-day Turkey). A century ago, Christians made up 20% of Turkey’s population, while now the figure is just 0.2%.

For 916 years, Hagia Sophia was the “world’s largest basilica” and the main seat of the Eastern Orthodox church where, for centuries, emperors of the Byzantine Empire were crowned. On 29 May 1453, Sultan Mehmet II arrived at the Hagia Sophia, built almost a thousand years earlier by the Byzantine Emperor Justinian I. After bringing an end to the great Christian Byzantine empire, Sultan Mehmet II prayed to Allah in the largest church of Eastern Christianity. Under the Ottomans, the Hagia Sophia was converted into a mosque and remained so until 1934, when the secularist Turkish leader, Mustafa Kemal Atatürk, turned it into a museum. It was meant to be an emblem of a new Turkey, capable of blending the features of the East and the West. Mr Erdoğan has extinguished that ‘hope’ and reinforced the idea of Islamic conquest. It was no coincidence that this year’s commemoration was held at Hagia Sophia, and Mr Erdoğan raised the stakes when he spoke of the conquest prospectively not just retrospectively. “I am wishing that God grant this nation many more happy conquests,” he said before reciting from the Quran. Turkish journalist, Burak Bekdil, rightly asks: “When [Mr] Erdoğan wished God to grant Turks ‘many more happy conquests’ which non-Turkish lands is he hoping to ‘conquer’?” There is growing concern over Mr Erdoğan’s recent expansionist activities: from Syria to Libya, Iraq to Yemen, and in disputed Mediterranean waters.

On 7 July, Cyprus’ President Nicos Anastasiades said that the EU needs to take stock of how much leeway it will give an “insolent” Turkey that wants to control the region. His comments came the day after Turkey dispatched warship-escorted vessels to drill for gas in an area where Cyprus insists it has exclusive rights. Turkey does not recognise Cyprus as a state. Cyprus was ethnically split in 1974 when Turkey invaded following a coup by supporters of union with Greece. Only Turkey recognises a Turkish Cypriot declaration of independence (in the northern part of the strategic island). Cyprus joined the EU in 2004, but only the internationally recognised south enjoys full membership benefits. Turkey claims almost half of Cyprus’ economic zone and insists it is acting to protect its interests and those of breakaway Turkish Cypriots to the area’s energy reserves.

Turkish Foreign Minister Mevlut Cavusoglu responded to Cyprus’ complaints by saying: “If Greece were to turn away from its maximalist ways and agree to a fair sharing (of rights), and if it were to convince Cyprus to a fair sharing of revenues (from the exploration of natural resources), then 80% of our problems would be solved.” No immediate decisions were reached by the EU at Monday’s [13 July] meeting but the representative ministers propose to revisit the issue at their next meeting in Berlin in August.

Turkey’s foray in Libya and mounting antagonism with Egypt

Turkey and the Libyan government (GNA) signed a memorandum of understanding in November 2019 to delimit maritime zones in the Eastern Mediterranean in an attempt to block further Greek and Cypriot energy drilling activities in the area. Turkey subsequently signed a military cooperation deal with the GNA and sent drones, armoured vehicles, Syrian mercenaries, and military officers to support the government, which had been struggling to fight off commander Khalifa Haftar’s offensive to capture the capital. The GNA then won a series of victories against Haftar’s Libyan National Army, including the seizure of the strategic airbase al-Watiya, which has seen the eastern commander’s yearlong offensive in western Libya crumble. Neighbouring Egypt declared last month that Sirte and Jufra were a red line that should not be crossed and threatened to take action. Since 2013, the conflict has been of strong geopolitical importance to Egypt due to the strategic convergence between the UAE and Saudi Arabia and their support for Haftar’s war against the Tripoli-based Government of National Accord (GNA)—the latter being backed by Turkey and Qatar.

From Egypt’s perspective, the emergence of a possible spill-over of violence into its territory could also create a dangerous convergence of interests with some radicalised Muslim Brotherhood groups that are operating both in Eastern Libya and in Egypt’s Western Desert. This is a critical point in understanding the similar vision of Egypt’s President Abdel Fattah al-Sisi and Haftar, who, ideologically, share a political project to combat political Islam and the Muslim Brotherhood movement, which are perceived as an existential threat by both leaders.

Turkish media quoted the Turkish navy on 8 July that prospective naval exercises will be held off the Libyan coast in three different regions. Each one of these operations will be named after famous medieval Turkish pirates and naval commanders, Barbarossa, Turgut Reis, and Chaka Bey. The newspaper Libyan Observatory said that “Turkey’s choice to name the operations after pirates of the Ottoman Empire cannot be missed and reflects the nature of the military mission that Ankara intends to carry out.” It has been reported that the Turkish naval exercises will take place in international waters with the participation of 17 warplanes and eight naval vessels, to suggest Ankara’s ability to control the region from the air and sea.

On 9 July, the Egyptian army launched, a large-scale military exercise dubbed “Hasm 2020” in the western region near the border with Libya. Various types of advanced battle equipment were used and tested in preparation for what some analysts believe could be an imminent intervention in Libya.

Turkey’s involvement in Syria, Iraq and beyond

Turkey has been diplomatically and militarily involved in the war in Syria since its outbreak in 2011. Their involvement grew quickly into military support of the Free Syrian Army, in opposition to the Syrian government forces. From there, it developed into direct military interventions in 2016–17, 2018, 2019, and in 2020. The military operations have resulted in the Turkish occupation of northern Syria since August 2016.

On 9 July, it was reported that Iraqi troops were reinforcing their positions along the border with Turkey to prevent Turkish forces from advancing deeper into Iraqi territory after more than two weeks of airstrikes and Turkey’s establishment of more than ten posts inside Iraqi territory. Turkey bombarded Kurdish villages in northern Iraq leaving more than half a dozen civilians dead, and Iraqi troops advanced in response almost 15 km into Iraqi Kurdistan. Gulf Arab countries have become increasingly concerned by Turkey’s military interventions abroad, especially in their reliance on known terrorist groups like the Muslim Brotherhood affiliates in places like Yemen and Al-Shabab in Somalia. As a result, the Gulf countries are backing Iraq in the face of Turkish aggression which is also seen as a strategic stand against Turkish expansionism elsewhere in the region.

FROM A CHRISTIAN PERSPECTIVE

Turkey has clearly been flexing its muscles in its immediate neighbourhood and much further afield. Mr Erdoğan appears to aspire to be a great Islamic leader, perhaps reminiscent of an Ottoman Sultan or a Caliph. He even recently (4 May) made use of the derogatory phrase “the leftovers of the sword” – a commonly used insult in Turkey that often refers to the survivors of the Christian massacres that mainly targeted Armenians, Greeks, and Assyrians in the Ottoman Empire and its successor, Turkey. According to Turkish journalist, Uzay Bulut, “As the head of state, [Mr} Erdoğan using the phrase publicly is alarming on many levels. The phrase not only insults the victims and the survivors of the massacres but also endangers the safety of Turkey’s dwindling Christian community, who are often exposed to pressures that include physical attacks.”

A Turkish ministry leader (who has also faced threats to his life) has expressed his concerns as follows: “[Our] current political issues does not support the existence and future of the Church here. There is no transparency, a proper democratic system, or freedom of speech. Our people are following systematic lies of our government and their international network.” The growing Islamism is also a threat to the Church in Turkey, as he explains: “Yes, Islamism is growing very fast. But when viewed in comparison to groups like the Islamic State and other terror groups, many people think that a Turkish-style Islamism is better for their future. This is a kind of Islamism with a secular ‘sauce’. The first bite is okay, but there is a strong Islamist root under the ‘sauce’. And most of the people have already consumed it before they realise. This is the other danger for Turkish evangelical churches. A growing Islamism always births new aggressive groups that blame Christians for every problem of the country. This leads to new attacks, threats, and official opposition and restrictions on churches.” He elaborates about how the Turkish government has focussed, especially recently, on foreign protestant Christians, who are known to provide support to the local Turkish churches.

These are potentially dark times for the Church in Turkey, which has weathered many ‘storms’ and attempts to eradicate them over the centuries. Anne-Christine Hoff, assistant professor of English at Jarvis Christian College in Texas summarises the situation: “Under Erdoğan’s leadership, especially after the 2016 coup, Turkey’s religious minorities find themselves marginalised and isolated from the Sunni majority. Anti-Western and anti-EU rhetoric often morphs into rabid anti-Christian incitement with the clear message that the country’s Christian citizens are not true Turks, a message that the state-controlled media and government officials have either actively promoted or refused to denounce. Exacerbated by government policies such as the addition of jihad teaching to the school curriculum, these measures place Turkey’s non-Muslim minorities in an increasingly precarious situation.”

Please pray with us: